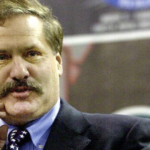 He was only 29 when tapped by Hall of Fame NFL Commissioner Pete Rozelle to lead the league’s Special Events Department as its director. This meant Steeg was in charge of the NFL’s biggest showcase, the Super Bowl.

Steeg, 67, is considered the NFL official most responsible for growing the Super Bowl from a game to the biggest sports event in the United States. He was in charge of it from 1979 to 2004.