Brett was a standout football player at Penn State, where he was the captain his senior year. He signed with the Miami Dolphins in 2011 and played in the NFL until 2014. Since then, Brett has been teaming up with the career development arm of AthLife to help develop his own path.

The group learned the basics of LinkedIn by identifying transferable skills from athletics and networking etiquette. Currently, student athletes are building their own LinkedIn profile in preparation for the next step beyond high school. Allen High School Sophomore Heiro Valdez-Rosario really enjoyed the experience, “Meeting a former NFL player like Brett, and learning about how to prepare for life after football proves that great achievements are always possible through hard work.”

Reflecting on the experience Brackett stated, “Today I had the privilege of getting to know a great group of student athletes at William Allen High School. Some day, all athletes stop playing organized sports, but the tools they build while playing can provide them with the intangibles needed to excel in the future.”

The opportunity was created through the AthLife Foundation and William Allen High School ‘s student athlete development program, S.O.A.R., which is now in it’s seventh year of operation. According to Academic Athletic Coach Melissa Roehrich “One of our goals is to prepare students to be lifelong learners who are active in their communities. Teaching them to use online resources in a professional manner helps to develop those skills.”

Junior, Jahnai Harry summed up, “Through what we learned today, Brett helped a new generation of Allen Football aspire to do great things!” 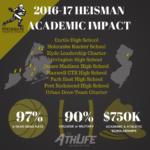 There is nothing more worthwhile and rewarding than making a difference in the life of a young person. We are… 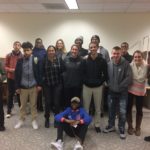 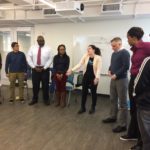 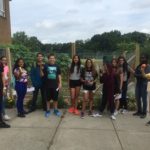 Do not let our name fool you! Yes, we are the Purple PACT, but we are also very green! Westhill High School's greenhouse and…